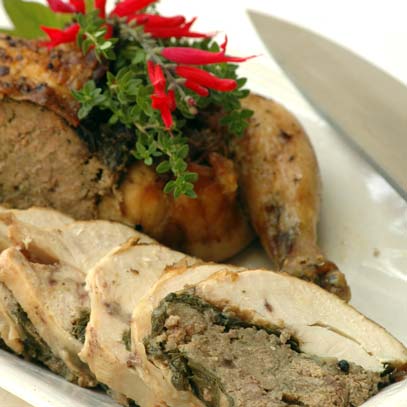 It is absolutely essential that you watch the video, it is almost impossible to explain the boning technique clearly in writing.

To assemble the bird

With a strong pair of scissors, snip off the wing tips. Remove and discard preen glands on top of the parson’s nose. Place bird on its breast and cut open along the back bone with a small sharp knife.

Start at the oysters in the middle of the back and separate the meat from the carcass with a slash-and-scrape movement. Cut through the tendons at the shoulder and hip joints.

Lift the bony carcass in one hand and let the meat dangle. Cut it loose very carefully over the breast bone, cut into the soft cartilage on the breast bone. Spread the boned chicken open, meat side up. You will notice two loose breast fillets, pull them off and position them lower down where there is no meat on the skin.

Sprinkle the gelatine powder evenly over the meat then spread the undiluted Chicken Stock over. Lay the blanched spinach leaves over the chicken to cover it completely.

Sauté the onion in the oil and butter until soft and lightly browned. Add the chicken livers and stir-fry them briefly until just cooked on the outside but still raw inside.

Stir in the undiluted Chicken Stock. Leave livers to cool to touch temperature.

Empty the Stuffing Mix into a medium mixing bowl. Add butter and boiling water. Stir and leave to stand for 5 minutes. Add the mince to the chicken liver mixture. Add the hydrated stuffing and mix everything together lightly until evenly blended.

To assemble the bird

Adjust the oven rack to one slot below the middle position. Preheat oven to 180°C.

Spoon the prepared stuffing down the middle of the spinach lining. See Ina’s tip below for left over stuffing. Place the bacon strips, slightly overlapping, on top of the stuffing.

Bring the sides of the chicken together and sew up using cotton twine or thin string. Fold the neck flap over and stitch up along the bottom. Mould chicken into a neat shape with your hands. Tie up with string as shown on video. Rub the skin with olive oil and season with Chicken Spice.

Place chicken on a trivet in a roasting pan to which you have added 2 cups of boiling water. Cover with wet, well oiled baking paper. Roast for ± 1½ hours until browned, the chicken will brown through the paper. Allow to rest at room temperature before carving.

It is best to use an electric knife for carving. Slice lengthways down the centre of the chicken so that you get two halves. Lay the one half on its side skin side up and carve into slices. Repeat with the other side.

Gravy can be made with the delicious pan juices by spooning off most of the fat, sprinkling 2 T (30 ml) of our Brown Gravy Powder over and adding 1½ cups (375 ml) of water. Alternately add 1 x 200 ml of our Ready to Serve Roast Chicken Gravy and ± half a cup of water.

If freezing the chicken, defrost before cooking, but you may still have to cook for an extra 20 minutes in the oven as the stuffing defrosts very slowly.

Either 250 g pork mince or 125 g Turkish apricots can be used in place of the chicken livers. 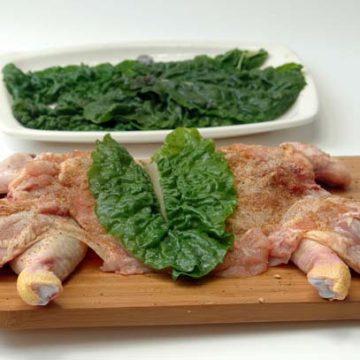 If you have any leftover stuffing, roll it into little balls, wrap half a piece of rindless streaky bacon around each ball and place stuffing balls alongside the Roast Potatoes half an hour before the end of their cooking time – delicious!