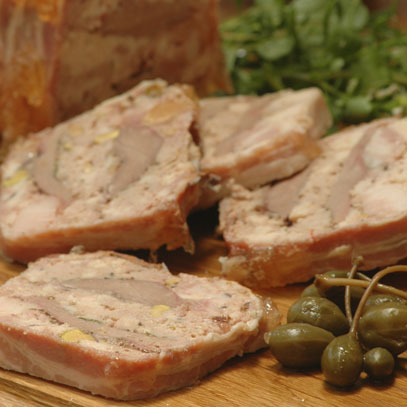 Do watch the video before you make this recipe. It always helps to understand the reasons for applying the correct techniques. I love to have this loaf in the fridge over the festive days. It is great on sandwiches or for a quick meal with cheese and salad. It will freeze exceptionally well.

Butterfly the duck breasts and season lightly with Garlic Pepper Seasoning. Lay on a platter with a rim. Sprinkle over ¼ cup (60 ml) of brandy, half of the sliced garlic and all the thyme leaves. Cover and refrigerate for 2 hours.

Adjust the oven rack to one slot below the middle position and preheat the oven to 160°C. Line a terrine dish or loaf pan with overlapping strips of streaky bacon (see Ina’s Tip). Cut the chicken breasts and pork fillet into rough blocks then chop in a processor to form a coarse mince mixture.

Spoon mince mixture out into a medium large mixing bowl, add Seasoned Sea Salt, remaining ¼ cup (60 ml) of brandy as well as the remaining brandy mixture in which duck breasts have been marinating. Separate each duck breast into 2 halves.

Sprinkle the gelatine over the water, leave to stand for 5 minutes. Microwave for a few seconds to melt. Add Liquid Chicken Stock and gelatine mixture to chopped meat together with pistachio nuts and cubed pork rashers. Stir gently with a knife to blend evenly.

Spoon a third of the mixture into the bacon lined tin, cover with 2 halves of one duck breast. Continue layering duck and mince in this way. Finish with mince mixture and flatten with the back of a spoon. Fold over the bacon ends.

Place the terrine in a roasting pan half filled with boiling water. Bake open for 1 hour. Remove roasting pan with terrine from the oven. Leave to cool in the hot water.

Cut a piece of hard cardboard measured to fit the inside of the terrine dish. Cover cardboard with foil. Push down on top of meat. Weigh it down with four cans or weights. Refrigerate terrine with weights, preferably overnight. Turn out, bacon side uppermost, then slice neatly with a very sharp knife.

How to line the terrine dish with bacon

Lay the bacon slices, let them overlap slightly, on baking paper. Cover with a second length of paper. Roll over the paper with a rolling pin to flatten and spread the bacon

Remove top sheet and turn bacon side, into the pan. Peel away paper.