Serves 8
Nobody can resist this special treat! And it is so easy to make and serve.
Recipe Category
Dessert - Cold
Products in this recipe

Measure the water into a medium sized mixing bowl. Sprinkle the Chocolate Mousse over the water and beat until well blended.
In a smaller mixing bowl, whip the cream until soft peak stage. Using the same beaters, whip the mousse mixture again until smooth. Gently fold the whipped cream into the mousse mixture using a spatula or metal spoon and stir until evenly blended. Refrigerate for 15 minutes.
Line a medium size Pyrex or plastic mixing bowl with a double layer of cling film. Spoon two thirds of the chocolate ice cream mixture into the bowl and make a large hollow in the middle. Fill the hollow with chocolate balls. Cover the balls with the remaining mixture and carefully level the top. Cover with more cling film and freeze overnight.

Remove the cling film over the top of the bowl, and peel the ends away. Turn the bombé out and peel away the clingfilm.
Return it to the freezer lightly covered until an hour before serving time. Leave in the fridge for that time to soften. Decorate. Slice with a strong knife dipped into boiling water.

90 g dark chocolate melted for piping over the top berries of your choice. 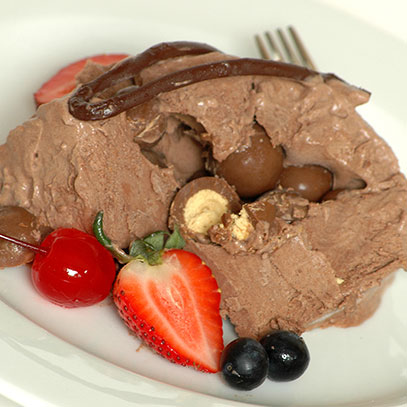