Serves 6
Roast duck is prized for its delicious skin and moist meat. Cooked correctly, the fat drains out and the duck will be light and delicious. You can stretch one duck to serve six if you also serve the Sage and Onion Forcemeat Balls with Bacon and Sundried Tomatoes as an additional meat dish.
Recipe Category
Poultry - Duck
Products in this recipe

The duck can be roasted the day before and the sauce made and refrigerated. On the day, put the duck back into oven at 180°C for 20 minutes, and reheat the sauce in the microwave.

Defrost the bird if frozen. Remove the giblets. Reserve the liver for Forcemeat Balls and place the rest of the giblets in the roasting pan, under the roasting rack to give flavour to the gravy. Trim off the very tips of the wings and cut away and discard the oily preen glands situated on the parson’s nose at the end of the backbone.

Adjust the oven rack to one slot below the middle position. Preheat the oven to 180°C. Season the duck inside and outside with Seasoned Sea Salt and rub the skin with the maizena or potato flour, this together with the salt helps to crisp the skin. Prick the skin all over with the point of a cooks knife, a trussing needle or sharp braai fork to allow excess fat to drain out during roasting. Stuff the cavity with the orange quarters and thyme.

Tie the legs and wings with string so that they sit snugly against the body.

Place a roasting rack over a big oven roasting pan and pour 4 cups (1 litre) of boiling water into the pan. (The water will prevent oily smoke fumes in your oven).

Position the duck on the rack, breast side up. Roast, uncovered for 1½ hours until the skin is brown and crisp. Now start basting with the Sticky Marinade. Roast and baste for a further 20 – 30 minutes until the bird is brown and shiny.

Remove the duck from the oven – tent lightly with foil or greaseproof paper and leave to rest for at least 10 minutes before carving.

Pour all the fat out of the pan, but retain any liquid and brown bits that remain. Put the pan on top of the stove over high heat. Add the water and Chicken Stock Powder. Scrape with a flat tipped wooden spoon to loosen all the tasty bits sticking to the pan. When the water has been reduced by approximately half, add ½ cup (125 ml) Sticky Marinade, orange marmalade and sherry. Boil fast for approximately 3 minutes until the flavours have blended.

Add the lemon juice. Adjust the thickness of the sauce with a mixture of potato flour and a little water.

Garnish duck with orange slices briefly dipped in the sauce. Do not pour the sauce over the duck but present it at the table for guests to help themselves.

How to carve the duck 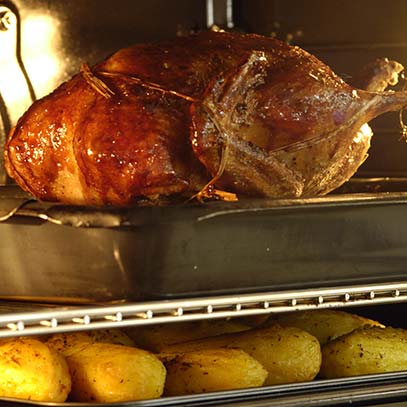