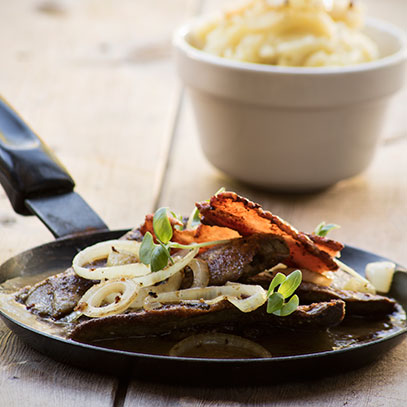 Lamb’s Liver with Bacon and Gravy

The world over, this traditional recipe can be found on breakfast or lunch menus. As children we had liver on the menu once a week. My mother believed we needed the iron. Chicken livers are widely available and can be prepared in the same way.

Cover the cleaned, sliced liver with cold tap water, add the Seasoned Sea Salt and leave it to soak for 30 minutes. Fry the bacon in a heavy based frying pan with a little of the oil until crisp. Drain the bacon on absorbent kitchen paper, but keep the fat. Stir-fry the onion rings in the remaining bacon fat. Remove from pan. Pat the liver dry on kitchen paper. Mix the flour with the Lemon & Black Pepper Seasoning and dip the liver in it. Add a little more oil to the pan and pan fry liver until crisp on both sides. Keep warm.

Blot the pan with paper towel to remove the excess fat, but not the pan-browning, and add the Roast Chicken Gravy, onion rings and tot of sherry. Warm through while scraping the pan to release the flavourful residue.

Serve the liver and gravy on a bed of mashed potatoes. Top with bacon. Serve a salad or a helping of baby peas on the side. Garnish with micro herbs or chopped parsley.